The Floating Storage and Regasification (FSRU) is a LNG storage ship that has an onboard regassification plant capable of returning LNG back into a gaseous state and then supplying it directly into the gas network. 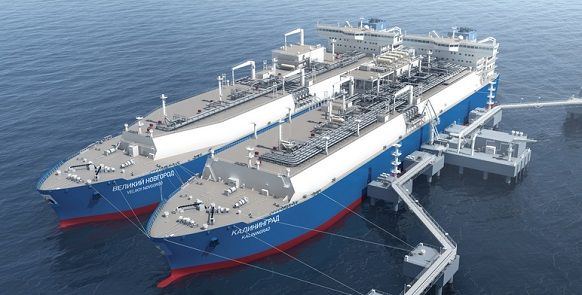 FSRUs and LNG ships have 4 to 6 separate cargotanks inside their hull. As LNG is stored at very cold temperatures, the cargo tanks are segregated from the steel hull structure by thick insulation.

There are 2 cargo tank designs commonly in use. Membrane tanks are box shaped and LNG ships with membrane tanks look like any other liquid bulk tanker. The other design is known as ‘Moss tanks’ that are spherical.

LNG ships equipped with Moss tanks have the recognizable dome shaped tanks visible abFSRUs and LNG tankers are powered by the LNG they carry, making them one of the most environmentally friendly ships in the world, emitting less CO2, NOx, SOx and particulate matters than most other ship types that burn heavy petroleum fuels.

As such, an LNG ship will only be carrying relatively small quantities of non-LNG fuels to power non-propulsion systems. Unlike oil tankers, FSRUs are not involved in oil cargo transfer operations where there is the possibility of a spill or pollution.

LNG cargo is a clear, colourless and odourless liquid; if a small quantity is accidentally spilled it will quickly and completely evaporate leaving no footprint behind.