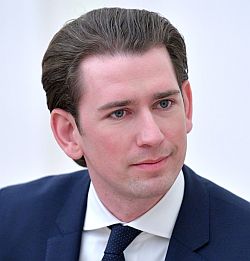 In 2003, he joined the Young Austrian People’s Party (ÖVP).

In 2004 Kurz enrolled at the University of Vienna to study law. After several years of political commitment on the district level, he was elected Provincial Chairman of the Young People’s Party of Vienna in 2007.

In 2008 he was elected Federal Chairman of the Young Austrian People’s Party.

Until his appointment as State Secretary for Integration in April 2011, he was a Member of Vienna’s Provincial Diet and of Vienna’s City Council.

From 2014 to 2017 he was Austria's Minister for Europe, Integration and Foreign Affairs.

In May 2017 Sebastian Kurz was designated Chairman of the Austrian People's Party (ÖVP).

Following the 2017 legislative elections, Kurz became the youngest Head of government in the world, at the age of 31.

Sebastian Kurz is not married, he has a girlfriend.