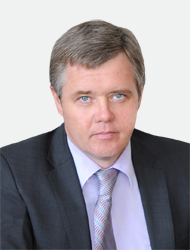 Pavel Shtark has been holding the position of the CEO for Mechel Mining Management Company since July 2013.

Prior to this appointment, since October 2012, Mr. Shtark worked as Deputy general director for coke and chemical production – Managing director of Moscow Coke and Gas Plant.

In 1996 he was chief of coke and chemical equipment repair shop at Nikom-Polymer.

In 1995-1996, he held consecutive posts of labor safety engineer, head of mechanization team and senior supervisor of production preparation at Vysokogorsk Mining Plant.

In 1992-1994 he was shift supervisor at Nizhny Tagil Metallurgical Plant.

Mr. Shtark graduated from the Urals Polytechnic Institute with a specialty in smelting production equipment and technology and the Ural State Technical University with a program on natural energy resources and carbon materials chemical technologies.