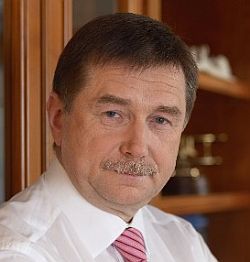 He has a PhD in Economics.

Since 2007 Deputy Chairman of the Management Committee,