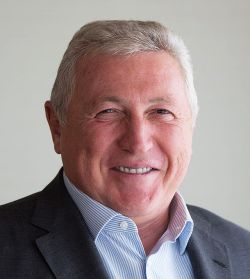 Was born on July 20, 1955, in Makhachkala of the Republic of Dagestan.   In 1977 graduated from Gubkin Institute of Petrochemicals and Natural Gas, holds a degree in Mining Engineering and Geophysics, obtained his Doctorate of Science.   From 1990 until 1995 he served as Managing Director of MD SEIS, a Russian-US joint venture oilfield services company.   Djaparidze served as the President of PetroAlliance Services Company Limited (which he also helped found) from 1995 to 2007 and was Executive Chairman of the Board of Directors from February 2007 until 2009.    In 2006, he was awarded the Russian Federation prize for special achievements in science and technology.

Djaparidze is one of the founders of the leading onshore & offshore drilling service provider in Russia, Eurasia Drilling, in 2002 and its current Chief Executive Officer.

Dzhaparidze started out buying outdated seismic facilities abroad and offering exploration services.
He founded service company Petroalliance, which he later sold to Schlumberger.
He bought oil giant Lukoil's drilling subsidiary for $130 million in 2004 and turned it into Eurasia Drilling.

He is a member of Eurasia Geophysical Society (EGS).