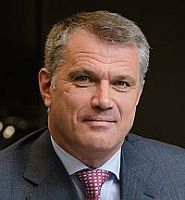 In 1987 graduated from the Ulyanovsk Higher Military Technical School named after Bogdan Khmelnitskiy.

From 1983 to 1996 he did military service in the Armed Forces holding different appointments.

From 2000 to 2006, he was the Head of Division for Oil Product Sales at the domestic market of the Commercial Department at Slavneft.

From 2006 to 2008, he was the Head of Oil Product Sales Directorate of the Commercial Department.

Egorov Vladimir has been Director General at CJSC Gazpromneft-Aero since 2007.