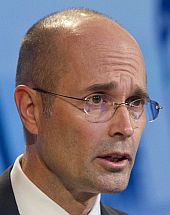 Craighead holds the International Executive Master of Business Administration degree from Vanderbilt University and earned a Bachelor of Science degree in petroleum and natural gas engineering from the Pennsylvania State University.

Martin Craighead has held a broad range of roles - from technical to operational to executive - before being named chairman and CEO in 2012.

Craighead began in the oil industry as a research engineer, then joined Baker Hughes’ predecessor Dresser Atlas in technical sales.

He served in a variety of operational and leadership roles in North America, Latin America and Asia Pacific.

Prior to his current role, he was president and chief operating officer of the $22 billion global organization, which has 59,000 employees working in more than 80 countries.