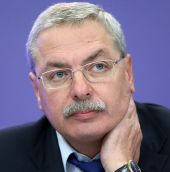 In 1979, he graduated from the Moscow Mining Institute.

1979-1993 worked at the Skochinsky Mining Institute where he occupied several positions from a research intern to a department head.

1993-1996, he was a Deputy Director General and, then, a Vice President of Russian Coal Company (Rosugol).

In June 2008, he was appointed as a Deputy Minister of Energy of the Russian Federation.