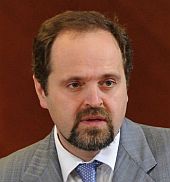 He was born 13 October 1968 in Elektrostal town, Moscow region.

In 1992, he finished his studies in Gubkin Russian State University of Oil and Gas.

1996-1998: worked at the company Prema-Invest as dealer and analyst in the Financial Instruments Department; Head of the Information Analysis Section; leading analyst at the Analysis and Marketing Department.

1999-2000: served at the Fuel and Energy Ministry as adviser, Deputy Head of Department and then Head of the Production Sharing Agreements Department

2005-2008: Head of the Economics and Finance Department at the Ministry of Natural Resources.

On May 21, 2012 Donskoy was appointed to the role of Minister of Natural Resources and Environment of Russia in Dmitry Medvedev's Cabinet.