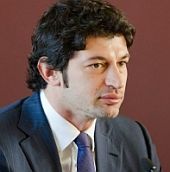 He played for the Georgia football national team from 1996 to 2011.

He was voted Georgian Footballer of the Year in 2001–2003 and 2006, was considered as one of Georgia's most important players.

After captaining his country 50 times in 84 appearances, Kaladze announced his retirement from the Georgian national team on 11 December 2011.

1 October 2012 was elected to the Parliament of Georgia  and approved as Deputy Prime Minister.

Since 25 October 2012 was elected to the Minister of Energy.

On July 12, 2017,  Kakha Kaladze quit his post in order to participate in Tbilisi Mayor’s elections as the candidate of the ruling Georgian Dream party.

Kaladze owns a company called Kala Capital and an organisation called Kala Foundation, as well as being an ambassador for SOS Children's Villages.

He is married and has 3 children.