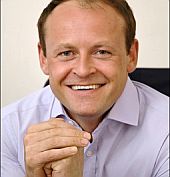 Graduated from the Leningrad Institute of Electrical Engineering with a degree in automated control systems.

1995-1997, held the post of CEO at Peterburg Pyatiy Kanal, a state-owned TV and radio broadcasting company.

2001, appointed as the Information Policy Department Director at Gazprom.

July 2004, elected the Chairman of Gazprom-Media Board of Directors.

February 2007, appointed Vice President at Gazprom Neft. Advisor to the Chairman of Gazprom Neft Management Board.

Starting January 2008, he 's been acting as Gazprom Neft Deputy CEO for corporate communications and a member of the Management Board.

Married, has a son and a daughter.