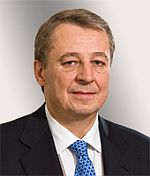 Alexander Korsik was born in 1956.

In 1979 he graduated from the Bauman Moscow State Technical University.

From 1995 through 1997 he was the Deputy General Director of CJSC KomiTEK-Moscow and a member of the Board of Directors of OJSC Oil Company KomiTEK.

In 2006 Mr. Korsik was appointed Deputy Chairman of the Management Board of Renaissance Capital Investment Group; from 2006 through 2007 he headed ITERA IGC.

From 2007 through January 2009 Mr. Korsik chaired the Board of Directors of RussNeft.

Since 2009 he has been the Senior Vice President, Head of the Fuel and Energy Business Unit of JSFC Sistema.

Since April 2011 till March 2016 Mr. Korsik has been the President and Chairman of the Management Board of Bashneft.

Currently, he is a member of the RABC Supreme Council.