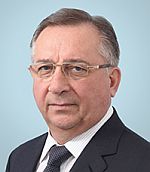 Was born in 1950 in Karaganda, Kazakh SSR (Soviet Union).

In 1973 he graduated from the Karaganda Polytechnic Institute with a specialization in Electrification and Automation of Mining Operations.

In the period from 2000 to 2007 he was the General Director of the State Enterprise “Russian External Economic Association “Zarubezhneft” (since 2004 – Zarubezhneft, JSC).

In 2007 he was elected the President of Transneft, JSC.

Married, has a daughter.