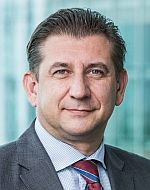 Andrey Fick was born in the Krasnodar Territory, in 1969.

He has an MBA degree and a PhD degree in Engineering.

He has been a member of Gazprom's team since 1996.

2000–2001: Engineer at the Construction Division for the Beregovaya compressor station (CS), Administration of the Russia – Turkey gas pipeline under construction, Gazprom Transgaz Krasnodar.

2001–2002: Deputy Director, Head of the Construction Division for the Beregovaya CS and the Blue Stream offshore section, Administration of the Russia – Turkey gas pipeline under construction, Gazprom Transgaz Krasnodar.