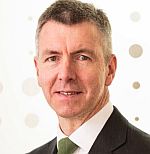 He has worked across a wide range of onshore and offshore upstream operations in international locations including the Alaskan arctic, the North Sea, Mexico, and as chief operating officer of BP’s operations in Iraq.
Mr- Campbell has also held senior roles in trading and in the company’s corporate centre.

Between 2003 and 2007, Campbell was based in Russia as a senior member of TNK-BP’s upstream leadership team.