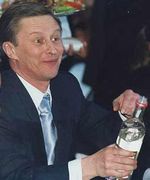 1976 - graduated from the translation department of the philological faculty, Leningrad State University, where he majored in English and Swedish
1977 - graduated from the Higher Courses of the KGB at the USSR State Security Committee in Minsk; and in 1981 from School No. 101 of the KGB First Main Directorate
1976 - began his service in the KGB. Upon graduating from the Higher Courses of the KGB in Minsk, Ivanov was sent to work at the State Security Department of Leningrad and the Leningrad region, where he met Vladimir Putin.

Late 1970s - began working in foreign intelligence, held various posts in Africa and Europe; appointed deputy department chief in the Foreign Intelligence Service (SVR); in the mid-1990s, became one of the youngest generals in the SVR.

1998-2001 - deputy director of the Federal Security Service (FSB), chief of the Department of Analysis, Forecast and Strategic planning of the FSB.
1999 - joined the Interdepartmental Commission in charge of Russia's participation in G8 activities.
1999-2001 - secretary of the Security Council of the Russian Federation
2001-2007- Russian Minister of Defense

In 2011 Ivanov was appointed Chief of Staff of the Presidential Administration of Russia.

On August 2016 Vladimir Putin has appointed Sergei Ivanov as Special Presidential Representative for Environmental Protection, Ecology and Transport.
Russian analysts are so far in disagreement about the reasons for Ivanov’s unexpected dismissal.


Fluent in English and Swedish as well as speaking Norwegian, and some French.
Hobbies: Fishing and reading detective novels in original English.

Married, with 2 sons (one of them, Alexander Ivanov, died on 3 November 2014, he drowned in the sea in United Arab Emirates).