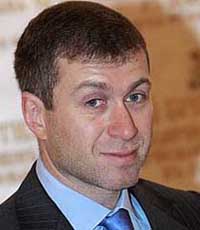 Born on October 24, 1966 in the city of Saratov. Orphaned as a young child, Ambramovich was raised by an uncle in the city of Ukhta (Republic of Komi), then lived with the family of another uncle in Moscow.

1983 - Graduated from middle school in Moscow.
Served in the army. Studied at the Moscow Vehicle Transport Institute, but dropped out.
1992-1995 - founded several companies, including Uyut (toy manufacturing) and Petroltrans
1993-1996 - head of the Moscow office of Swiss oil trading company Runicom
1996 - with Boris Berezovsky, took over Sibneft oil giant
1999 - elected to the State Duma from the Chukotka Autonomous Area
Abramovich was the governor of Chukotka from 2000 to 2008.
July 1, 2003 - bought Chelsea Football Club
In August 2012, Abramovich won a suit in London's High Court brought by Berezovsky, who sought $5.6 billion for claims that Abramovich failed to pay for stakes in Sibneft and Rusal.
According to Forbes, Abramovich's net worth in 2015 was US$ 7.8 billion (2015),[3] making him the 12th richest person in Russia.

Divorced his second wife, Irina Malandina in 2007. They have five children, three girls and two boys.
Abramovich has two children with Daria Zhukova, the daughter of a prominent Russian oligarch Alexander Zhukov.