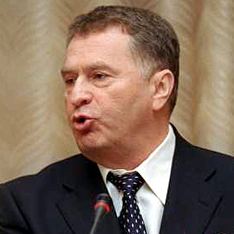 Since the beginning of perestroika began his political activity.
In 1989 he began building his own party.
In 1991 he officially registered the liberal-democratic party.
From December, 1993 to December, 1999 deputy of RF State Duma of the 1st ans 2nd sessions.

In 1996 v stood for the Russian president elections, but he placed fifth in the first round of voting, with only 5.7 % of the vote..

The LDPR nominated Zhirinovsky as their presidential candidate in the 2008 presidential elections, and he came in third with just more than 9% of the vote.

In 2012 he stood  again for the Russian presidency, with only about 6% of the vote according to official results.

Family.
To the question about his parents- nationality Zhirinovsky answered: "Mother is Russian, father is lawyer".
Father - Volph Isaakovich Eidelstein.
Up to June, 10, 1964 Vladimir Volphovich had his father-s surname v Eidelstein, then changed it to his mothers.

Wife Galina Alexandrovna Lebedeva. Graduated from Moscow State university. Master of biological sciences.
They got married in 1970, after Zhirinovsky-s coming back from Turkey.
Son Igor Vladimirovich Lebedev, born in 1972. Graduated from the Law Academy. Married. Has 2 children.