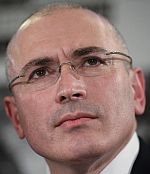 Born in 1963 in Moscow.
In 1986 - graduated from the Mendeleev Moscow chemical-technical institute, qualification - engineer, technologist.
In 1988 - graduated from the Plekhanov Institute of National Economy.
In 1986-87 - deputy secretary at the Komsomol district committee in Frunze.
In 1987-89 - director of the Center of young people scientific-technical work.
From May, 1989 to1990 - Chairman of the board of Commercial bank of scientific-technical progress. In 1990 the bank was renamed to MENATEPinvest.
In 1990 - Khodorovsky was adviser of the Russian premier-minister Ivan Silaev.
In 1990-1991 - general director of interbank association MENATEP.
Since August, 1991 - Chairman of board of directors of credit-financial enterprises association MENATEP.
In 1992 - was appointed chairman of investment fund of power industry assistance.
Adviser of RF Prime-minister.
In March, 1993 - was appointed RF deputy Minister of power.
From 1997 till 1999, Khodorkovsky was Chairman of the united managing board of the Rosprom-YUKOS company.
2003 - Arrested for tax evasion, embezzlement and fraud
2004 - First court case begins
2005 - Found guilty on six of seven charges, jailed for eight years
2007 - Yukos declared bankrupt
March 2009 - Second court case starts in Moscow
December 2010 - Convicted of embezzlement and money laundering
August 2013 - second sentence reduced
December 2013 - President Putin pardons him after a request for clemency and he is flown to Germany.
Now resident in Switzerland.