Khanti-Mansiysk, February 26 - Neftegaz.RU. Gazprom Neft has entered into a further social and economic cooperation agreement with the Government of the Khanti-Mansi Autonomous Okrug - Yugra. The signatories to this agreement were Alexander Dyukov, CEO  of Gazprom Neft, and Natalya Komarova, Governor of Yugra.

The agreement outlines a series of socially meaningful initiatives to be implemented in Yugra with Gazprom Neft’s involvement throughout 2020. The company will be supporting projects directed at developing culture, sports, education, infrastructure and engagement with the ethnic minorities of the Russian Far North in the Okrug’s Surgut, Nozhnevartovsk, Oktyabrsk, Kondinsky and Khanti-Mansiysk districts.

Gazprom Neft will be allocating funds for neighbourhood enhancement in local villages, in supporting social infrastructure, and in building housing. The XIX “Spirit of Fire” International Debut Cinematography Festival will again be taking place in Khanty-Mansiysk, supported by Gazprom Neft.

“Yugra remains the most important oil region in the country, producing more than 40 % of all the oil in Russia. Gazprom Neft is not only undertaking geological exploration and field development here, but is also proactively developing new technologies and implementing scientific and educational initiatives. It was precisely here that we produced Russia’s 1st ever ‘digital twin’ of a field, and here that we established our Upstream Digital Control Centre. Supported by the regional government, one of the oil industry’s most critical challenges is now being addressed - the development of the Bazhenov Formation," said Alexander Dyukov, CEO of Gazprom Neft.

"Obviously, the Okrug’s economic development would be impossible without social progress and an improving quality of life. We have an immediate interest in making work - and life - in the Okrug interesting. Only then will the best people remain in the region. This new agreement underscores our longstanding partnership with the Government of Yugra, making it possible for us to implement a range of social initiatives directed at improving living standards for residents in the region” Dyukov noted. 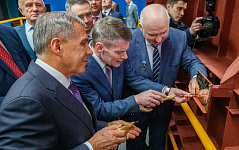 252
Russia’s 1st LNG-powered passenger ship to be built in Tatarstan
Advertising at neftegaz.ru