«The border crossing marks the completion of construction of the 2 offshore lines within the Russian EEZ. In total 448 kilometers of the pipeline were laid down, equally divided over the 2 lines,» said a statement on the website of the Allseas Group, which has assigned the «Pioneering Spirit» construction vessel to construct the pipeline.

The vessel had crossed the Bosphorus and entered the Black Sea on May 31, 2017, and President of Russia Vladimir Putin had officially started pipelaying on June 23, in the deepwater sections of the Black Sea.

Turkish Stream was 1st proposed by the Russian president in 2014 during his visit to Turkey. 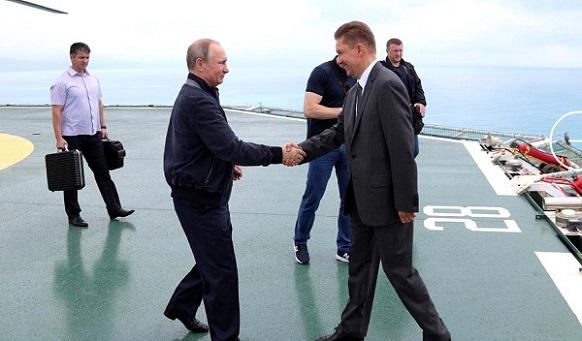 Meanwhile, negotiations on the European section that will be built jointly by BOTAŞ-Gazprom were in progress.

Currently, 2 primary routes are being discussed and the pipeline will either move toward Serbia and Hungary via Bulgaria and toward Italy via Greece or it will enter Europe via Bulgaria and Greece.

In under 6 months, approximately 25 % of the construction of the offshore pipeline was completed.

Gas could flow through the pipeline by late December 2019.

Turkey aims to capitalize on its geographic position by becoming an energy bridge between Central Asian and Middle East suppliers and the European market.

For Russia, the link through Turkey is part of its growing ambition to add diversity to export arteries to the European market.

Most of Russia's gas to Europe runs through Soviet-era pipelines in Ukraine, where geopolitical issues add a layer of risk.

105
Overdue debt of Russian consumers for gas supplies reduced by RUB 5.3 billion in 2019

309
LUKOIL to support social development of Yamal
Advertising at neftegaz.ru