US President to Visit Pakistan in 2011

President of the United States Barack Obama plans to pay an official visit to Pakistan in 2011 and invited the Pakistani president to visit Washington, a statement from the White House said 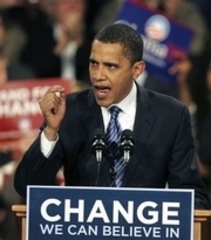 "The President explained that he would not be stopping in Pakistan during his trip to Asia next month, and committed to visiting Pakistan in 2011, as well as welcoming President [Asif Ali] Zardari to Washington," the statement said.

Obama met on Wednesday with the Pakistani delegation to the U.S.-Pakistan Strategic Dialogue discussing various issues including the fight against Taliban militants.

Violence surged in Pakistan in 2009, with Taliban militants staging regular attacks on provincial government officials, police and civilians and planting roadside devices as part of their fight against U.S. and NATO troops.

Over 600 militants, including several influential Taliban commanders, were killed in U.S. and NATO drone airstrikes in northwest Pakistan near the Afghan border in 2009.