Russian Rosneft in the mix for northern Iraq

The rehabilitation of a pipeline from northern Iraq could be in the cards for global oil companies.


The rehabilitation of a pipeline from northern Iraq could be in the cards for global oil companies, Iraq's oil minister said at talks with a Russian company. Iraqi Oil Minister Jabbar al-Luaibi met in February 28, 2018, in Baghdad with the regional director of Rosneft to discuss opportunities in the Iraqi energy sector, including efforts to overhaul a pipeline running north from Kirkuk to the Turkish port city of Ceyhan.

«Luaibi said that the ministry of oil 'through its keenness to raise the outcome' is ready to restart the pumping of crude oil through Kirkuk-Ceyhan pipeline by the agreement with Kurdistan,» a ministry statement read. «He also said the ministry of oil does not object if Rosneft wants to expand its work to include all the fields of Kirkuk, after the coordination with BP.»

The minister in January visited the oil fields of Kirkuk with Michael Townsend, one of BP's top officials. By the ministry's read, BP will carry out studies necessary to boost field production to around 750,000 barrels of oil per day. BP suggested in October it was in broader talks with efforts in Kirkuk, though so far has been tight lipped in its potential role in northern Iraq. A MoU with BP followed a meeting between Luaibi and Jon Wilks, the British envoy to Baghdad.

Crude oil from northern Iraq crosses the Turkish border by truck and through a pipeline running north from the semiautonomous Kurdish region. The pipeline from Kirkuk was damaged severely by Islamic State militants.

BP has a role in the supergiant Rumaila oilfield near the southern port city of Basra. David Nicholas, a spokesperson for BP, said the agreement on Kirkuk is a carry-over from work already planned. 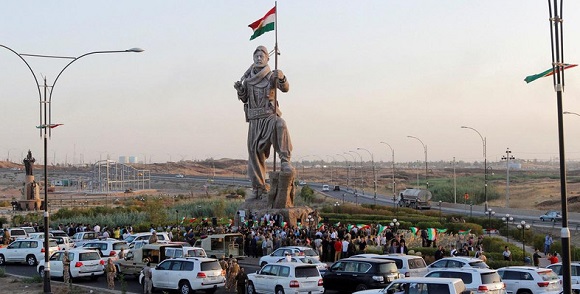 Iraqi forces in early October took control over oil fields in Kirkuk, a territory of dispute between the federal government and the semiautonomous Kurdistan. The seizure followed a contentious referendum for independence in the Kurdish territories, which coincided more or less with the Iraqi liberation of northern territory from the terrorist group calling itself the Islamic State.

Luaibi last year expressed frustration with announcements of intent to sign oil contracts inside the «geographic borders of Iraq without telling the federal government of the ministry of oil.» A statement carried by his ministry said such action was considered blatant interference in its internal affairs and an insult to Iraqi sovereignty.

The statement made no reference to any specific company or contract. The announcement, however, came one day after Rosneft signed an agreement with the semiautonomous Kurdistan that put a production sharing agreement for 5 production areas in Kurdish territory in motion.

Politics
473
473
Ilham Aliyev: "For the 1st time in history, Azerbaijani gas is already in Europe"

Politics
210
210
U.S. extends waiver for Iraq to import Iranian energy for another 3 months