Gold prices dive as dollar jumps on because of flu scare 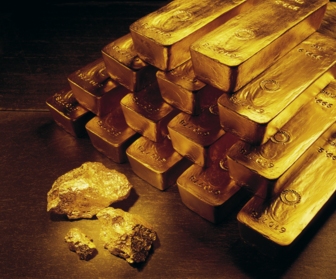 Gold prices retreated yesterday as the dollar showed strength against other major currencies. Other commodities, like oil and grain prices, faltered amid fears that a swine flu outbreak could threaten an economic recovery. A never-before-seen flu strain has now killed about 150 people in Mexico.

The United States and Canada have confirmed several cases, but none have been fatal. And the European Union health commissioner has advised Europeans to avoid nonessential travel to Mexico and the United States. Though the virus doesn’ t spread through food, the outbreak scare has the potential to hurt US export demand for pork and other commodities like corn.

Fears of a rampant outbreak sent investors clamoring for the safety of the US dollar, which put pressure on gold prices. Gold prices tend to fall when the dollar is strong. Investors often use the precious metal as a hedge against inflation, which can be triggered by a weak dollar. Gold for June delivery slipped $5.90 to settle at $908.20 an ounce on the New York Mercantile Exchange.

Gold prices edged up 3% last week, benefiting from a weak dollar and unease on Wall Street amid a flurry of mixed corporate earnings reports. July silver added 3.5 cents to $12.9850 an ounce, while July copper futures fell 6.45 cents to $1.9855 a pound.

On Wall Street, stocks wavered as the swine flu outbreak put pressure on airlines and other tourism-related stocks. General Motors Corp., however, offered the market some hope with a major restructuring plan that will see the struggling automaker slash 21,000 jobs and phase out its Pontiac brand.

Grain prices tumbled on the Chicago Board of Trade.