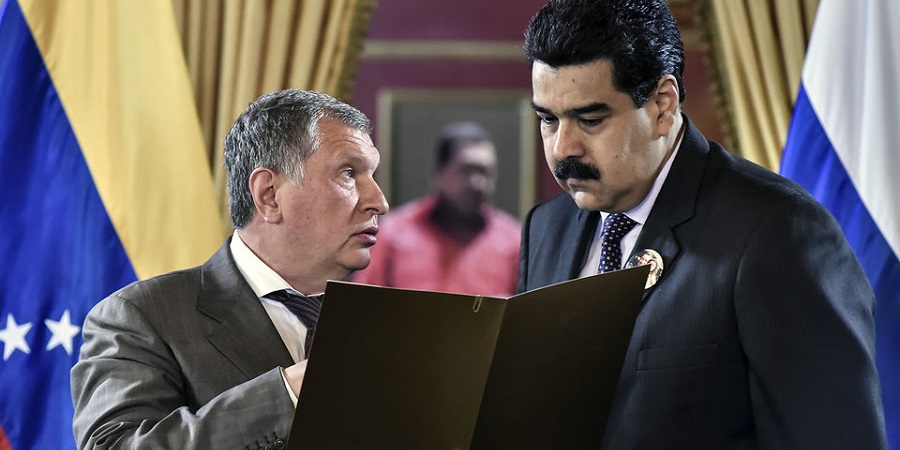 Moscow, February 19 - Neftegaz.RU. United States Department of Treasury announced on February 18, that the Trump administration had decided to sanction Rosneft Trading SA, the trading unit of Russian Rosneft. The sanctions imposed by the Trump administration  increase pressure on Russia, which the U.S. sees as the main backer of Maduro's government.

Administration officials said Rosneft Trading and its president, Didier Casimiro, would be added to a financial blacklist in a move expected to largely freeze him and the company out of the global financial system.

"I think this is a very significant step and I think you will see companies all over the world in the oil sector now move away from dealing with Rosneft Trading" said Elliott Abrams, the U.S. special representative for Venezuela.

He said Rosneft Trading now handles about 70 % of Venezuelan oil. The US is considering additional economic sanctions aimed at further tightening economic pressure on the Maduro government, the special US envoy for Venezuela, Elliott Abrams told reporters.

US secretary of state Mike Pompeo said Rosneft is the primary broker for the sale and transportation of Venezuelan crude oil. “Rosneft Trading has propped up the dictatorial Maduro, enabling his repression of the Venezuelan people,” he said in announcing the sanctions.

Venezuela´s opposition leader Juan Guaido called the latest sanctions a “new victory!”. “Whoever supports the dictator, from whatever part of the world, will bear the consequences,” he tweeted. “Those who collaborate with democracy will be welcomed.”

The action against Rosneft Trading and Casamiro means any assets they have in the US or in the control of US financial institutions will be frozen.

Rosneft announced on February 18 that the sanctions against Rosneft’s subsidiary RTSA and its Chairman "are illegal, unjustified, and an act of legal abuse." Rosneft noted that the company "has been implementing its projects in Venezuela in strict compliance with rules of international and national laws".

90
Victory for Poland: the Arbitral Tribunal in Stockholm rules to lower the price of the gas sold by Gazprom to PGNiG

139
Rosneft sells it Venezuelan assets and becomes an owner of 9.6% of its share capital

317
More than a million oilfield services jobs will ‘likely be cut’, Rystad warns
Advertising at neftegaz.ru