A turbine runner and tooling weighing 115 tonnes and destined for the Ust-Srednekanskaya hydroelectric power station has arrived safely at Sokol Airport in Magadan, Russia, onboard a Volga-Dnepr Airlines’ An-124-100 ‘Ruslan’ freighter. 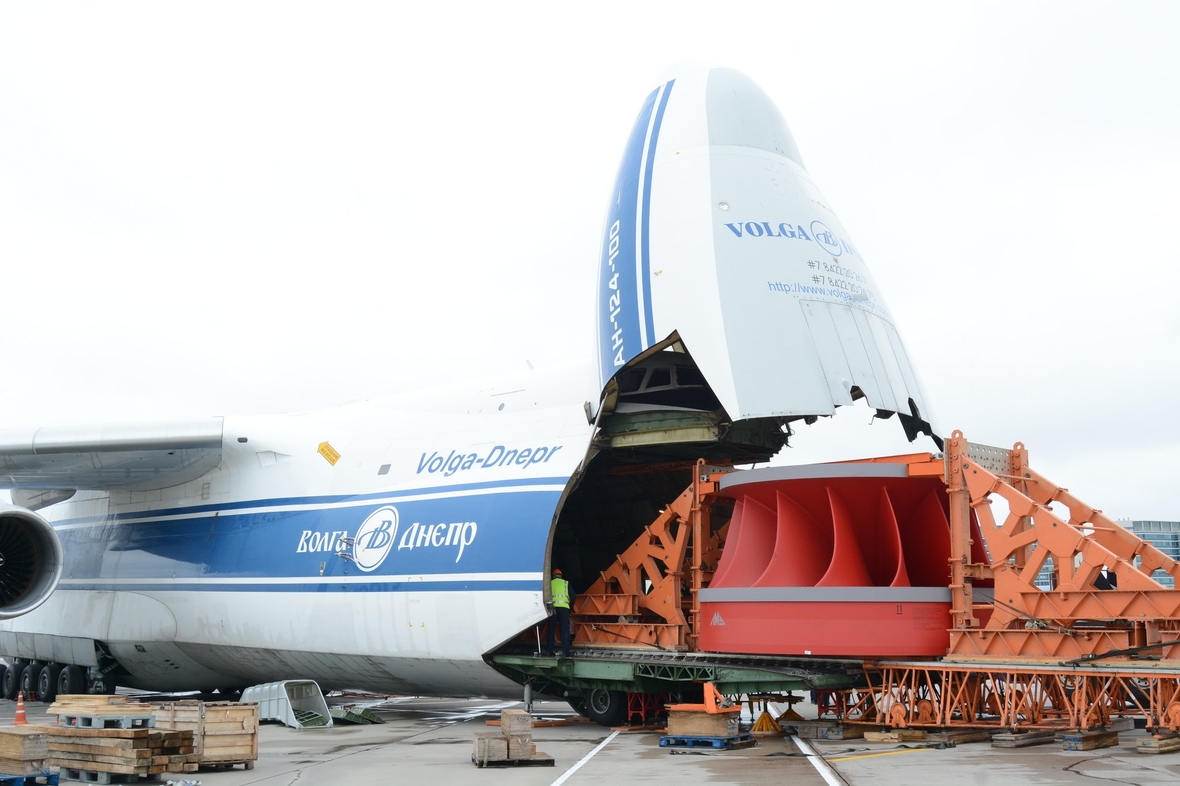 A turbine runner and tooling weighing 115 tonnes and destined for the Ust-Srednekanskaya hydroelectric power station (HPS) has arrived safely at Sokol Airport in Magadan, Russia, onboard a Volga-Dnepr Airlines’ An-124-100 ‘Ruslan’ freighter.

Preparations for the transportation of the 6-metre diameter turbine runner from St. Petersburg’s Pulkovo Airport started in late 2015 in consultation with Power Machines Company, which produced the 85-tonne runner for the HPS.

Volga-Dnepr has extensive experience of transporting radial-axial and adjustable-blade turbine runners onboard its fleet of An-124-100 freighters.

It has also developed its own tooling to be able to spread the weight of such extreme cargo loads throughout the cargo cabin floor of the aircraft.

Based on the specific technical characteristics of the turbine runner for the Ust-Srednekanskaya HPS, Volga-Dnepr’s engineers modified the tooling within 20 days to ensure the safety of the load.

The runner was mounted inside the tailored frame at the production site of Power Machines Company by Volga-Dnepr’s technical crew before it was delivered to Pulkovo Airport using a trailer.

The An-124-100’s technical crew assembled a special ramp extension with slide rails in order to load the 85-ton structure onboard the aircraft. After placing the runner on the ramp extension the cargo was pulled inside the ‘Ruslan’ freighter using a winch and firmly secured.

The loading procedure took Volga-Dnepr’s engineers some 10 hours to complete, meeting the required deadline for the operation.

The turbine runner is for the hydroelectric unit No. 3 at Ust-Srednekanskaya HPS, which is scheduled to commence operation in 2018.

The power station will have an estimated 570 megawatt (MW) capacity and is located 217 km down the Kolyma River from the current Kolymskaya HPS, which provides continuous electricity supplies in the Magadan region.

The final commissioning of the station will enable major infrastructure projects to be implemented in the region.