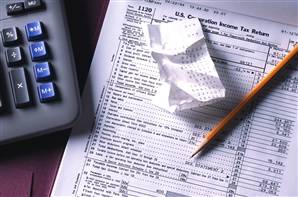 The proposal, which Democrats want to attach to a small business jobs bill, will not be considered in the Senate until mid-September, however, after lawmakers return from a five-week recess.

Under the plan by Senate Finance Committee Chairman Max Baucus, the integrated oil companies after the end of this year would no longer be able to deduct 6 percent of their income from oil and gas production from their tax liability.

The committee said this repeal "would only apply to the five largest corporations with more than $1 billion of before-tax income."

The five, according to the Senate Finance Committee, had a combined profit of $25 billion during the first quarter of this year. "In the five years since enactment (of the tax break) ... these major integrated oil companies have posted $521 billion in profits," the committee said.

"Furthermore, it is not clear the goal of this deduction, which is to improve America's energy security by promoting domestic production, has been reached," the panel said.

The proposed tax change is aimed at helping to offset the cost to the government of the small business jobs bill.

If embraced by Congress, the tax change would hit BP just as it is figuring out how to deal with the massive costs it faces in cleaning up after its Macondo well oil spill in the Gulf of Mexico -- the biggest environmental accident in U.S. history.

That cleanup effort could end up costing tens of billions of dollars. Congress also is looking at ways to lift all liability caps on BP for economic damages from the April 20 disaster. Legislation to lift the liability cap was passed by the House of Representatives last week but is hung up in the Senate.