Ukraine will have the lowest taxes in Europe after a new tax code is adopted, Prime Minister Mykola Azarov said on Friday. 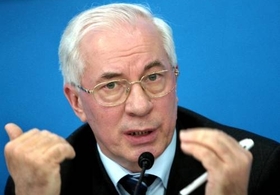 Ukraine will have the lowest taxes in Europe after a new tax code is adopted, Prime Minister Mykola Azarov said on Friday.

The government is to submit an amended tax code to the national parliament, the Supreme Rada, by Sunday.

"We will set low taxes, perhaps the lowest in Europe," he said, adding that the code's main principle was the liberalization of tax legislation.

The code establishes zero taxation for small businesses for a period of five years and the same zero rate will apply to the hospitality sector and light industry for 10 years.

Owners of apartments and houses with a floor area of more than 100 square meters in town and 200 meters in rural areas will pay a real estate tax at a rate of $1.25 per square meter.

Azarov said a mere 5% of the country's population would be subject to the real estate tax.

Household bank deposits exceeding $25,000 will be taxed at 5%. The Cabinet earlier sought to tax all deposits at 5%.