Australia can no longer bank on its massive pipeline of committed liquefied natural gas (LNG), gas and petroleum projects, worth $204 billion (AUD 195 billion), to shield the country from the global economic downturn amid cost pressures brought on by factors such as skilled labor shortages and a strong local currency. 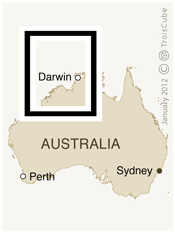 Australia can no longer bank on its massive pipeline of committed liquefied natural gas (LNG), gas and petroleum projects, worth $204 billion (AUD 195 billion), to shield the country from the global economic downturn amid cost pressures brought on by factors such as skilled labor shortages and a strong local currency.
Investment committed to Australian resource projects – including coal and metals – at the end of October rose to a record $280 billion (AUD 268 billion), data from Australia's Bureau of Resources and Energy Economics (BREE) released Wednesday showed. The figure however does not paint an optimistic picture for Australia's energy industry, as it reflects mostly higher project costs.
"The increase is primarily a result of the approval of a second train for the Australia Pacific LNG project and cost increases to projects that were already committed," BREE said in its report.
The BREE report listed BG Group's Queensland Curtis LNG (QCLNG) project and Santos' Gladstone LNG (GLNG) project as examples of committed projects that had experienced cost increases recently. Santos said in late June this year that the cost of its GLNG project will increase by 16 percent to $18.5 billion, while BG Group disclosed in May that the company could need to spend $5.4 billion more than it had originally estimated for the $20.4 billion-QCG project.
U.S. major ConocoPhillips and Australia's Origin Energy approved in July a second train for the onshore $23.7 billion APLNG project in July. Origin had acknowledged in July that the company is not immune to future cost pressures.
The shortage of skilled labor is a key factor driving up LNG project costs, Santos' CEO and Managing Director David Knox said in a statement earlier this month.
"A lot of costs is labor, with the cost of Australian labor double that of many of our competitors, and productivity in most cases lower. At Santos' GLNG Project for example, labor costs make up between 50 to 60 percent of total project costs," Knox said.
"Recent studies show that Australia is the most expensive offshore exploration and production location in the world today – three times as expensive as the U.S. Gulf Coast, and slight more expensive than Norway," Knox added as emphasis to his concern on rising project costs.
In its review of Australia's LNG sector, BREE also noted that "the next wave of investment is far from guaranteed and future investments will be reliant on the ability of project managers to control construction costs."

Investors have meanwhile turned decidedly coy when it comes to sinking dollars into additional project developments. Shell revealed Nov. 20 that it may delay its final investment decision on the CSG-based Arrow LNG project, a joint venture with PetroChina forecasted to cost $20 billion. Shell is also taking a cautious approach towards investing in a fourth LNG train at the Gorgon project. Shell stated that while there had been good exploration success around Gorgon, it will only announce its investment decision on the project next year.

Economy
183
183
Russia's Finance Ministry: Most of EFSD's loan for Belarus will be used to pay off debt to Gazprom