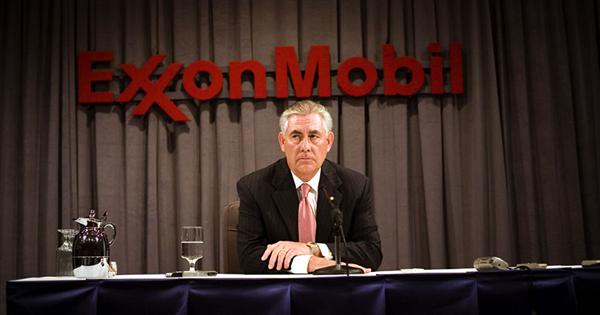 “Pro-growth energy policies can spur our economy by opening access to American resources, enabling investment and innovation, and by advancing energy and infrastructure projects that employ millions of Americans,” Tillerson said in a speech at North America’s Building Trades Unions legislative conference in Washington, D.C.

Since the recession that began in late 2007, employment in oil and gas fields has increased 40 percent and in states where oil production is on the rise, overall employment growth has outpaced the rest of the United States.

“The oil and natural gas industry now supports 9.8 million jobs, and the average job in oil and gas production pays roughly seven times the federal minimum wage,” Tillerson said. “The U.S. energy sector now accounts for $1.2 trillion of the U.S. economy – equal to 8 percent of our gross domestic product. And thanks to technological breakthroughs and visionary projects, in 2013 our nation became the world’s leading producer of energy from oil and natural gas.”

U.S. energy workers, through the leaders and members of American unions, can help convey the reasons why access to the country’s energy resources and expansion of its energy infrastructure is so important, said Tillerson.

With sound energy policies, the U.S. could see up to 452,000 new jobs created by 2035 through liquefied natural gas exports, according to a recent study. Some 500,000 new jobs supported by new oil sands development could come within 20 years and in oil and gas exploration and production alone, 166,000 jobs for African American and Hispanic workers could be generated between 2010 and 2020, the study shows.

Among the challenges faced by the United States is an aging workforce and retirement of baby boomers. Tillerson said the energy industry and the building trades unions need to work together in the years ahead to find a way to replace skilled workers, including scientists, engineers, electricians, welders and technicians.

“Whether you work at ExxonMobil or for the building trades, we share the same desire for America’s future: We want the safest, best-trained and best-qualified workforce in the world,” Tillerson said. “Today’s unions can help tomorrow’s workforce by communicating the urgency of action and the need to be fast and flexible in the modern global marketplace.”

In many ways, he said, the old training model should be updated for today’s realities. In the old paradigm, before a trainee even started training, these programs sought businesses to commit to hiring individuals after training.

“In industry, we recognize and appreciate that this training is often strong, but given global, economic and regulatory uncertainty, it is simply impossible for us to commit to such hiring years in advance,” Tillerson said. “For this reason, workers need a new model. By building on our frank and open dialogue, we can build one worthy of 21st century challenges.”