PetroChina and Cnooc reported sharply lower profits for the first half of 2016. 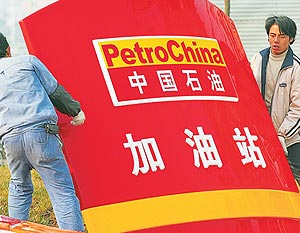 PetroChina and Cnooc reported on August 24, 2016, sharply lower profits for the first half of 2016.

Cnooc's sharp decline in profits was expected after the company warned in the end July 2016 that it was likely to lose about 8 billion yuan (($1.2 billion) in the first-half due to low oil prices and charges taken against its Canadian oil sands assets.

«Looking ahead to the second half of the year, uncertainties still remain in both the international and domestic macro environment,» Cnooc Chairman Yang Hua said on August 24, 2016. «Further recovery of international oil prices faces headwinds.»

Compared with the first half of 2015, net profit of the state-run explorer PetroChina from January-June 2016 plunged 98% to 531 million yuan ($80 million), its the lowest profit since the company went public in 2000.

«In the second half of 2016, the recovery of the global economy will remain weak ... the global oil price is likely to keep fluctuating at a low level,» said Petrochina´s Chairman Wang Yilin. «The group will exercise strict control over investments and costs, and endeavour to control and reduce losses while maintaining sufficient resources.»

Operating profit from natural gas transmission and distribution fell 23.1% to 14.87 billion yuan due to a sharp fall in gas prices.

High production costs, aging fields and low prices have resulted in a decline in China’s domestic crude output, helping drive imports by the world’s second-biggest consumer to a record.

The country’s crude production in July tumbled to the lowest since October 2011 and has slipped 5.1 percent in the first seven months of the year, according to data from the National Bureau of Statistics.

Economy
315
315
Russia's Finance Ministry: Most of EFSD's loan for Belarus will be used to pay off debt to Gazprom