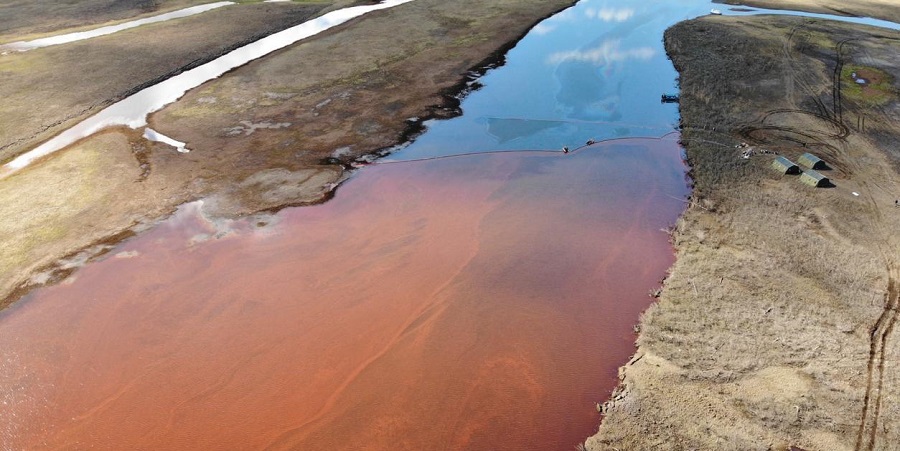 Norilsk, June 9 - Neftegaz.RU. A Gazprom Neft emergency rescue team remains in operation cleaning oil-product deposits from the Ambarnaya river. Mobile teams are making their way along the riverbed, using oil gathering equipment to skim oil slicks from the water surface, which are then held, temporarily, in collapsible tanks, before being sent by pipeline to hermetically sealed prefabricated storage tanks on the banks of the river delta.

Removing the fuel collected from these inaccessible marshlands will be organised after next winter’s 1st frosts, when a winter ice-road (for vehicle transport) can be laid. The team has already completed its work at its originally allocated section, and has now moved on to a more challenging and inaccessible area. 470 cu m of oil had been collected as at Monday morning, with work continuing, round the clock.

The emergency rescue team, special vehicles and equipment were all mobilised by Gazprom Neft in less than 24 hours and transported to the emergency site in Norilsk by planes and helicopters from the Khanti-Mansi and Yamalo-Nenets Autonomous Okrugs. The squad is made up of 72 highly qualified and experienced company specialists, from Megion, Khanty-Mansiysk, Noyabrsk and Petersburg - the team’s make-up meaning it is able to conduct oil-spill liquidation independently, with specialists including members of the company’s post-accident clean-up and salvage unit, oil-recovery boom-vessel skippers, metal workers, mechanics, electric and gas welders, and paramedics.

Victor Sorokin, Head of the Gazprom Neft Upstream Division’s HSE Department, has been seconded to coordinate work with the Ministry for Emergency Situations’ (EMERCOM) Emergency Response Centre in Norilsk. A field camp has been set up in the area where the accident occurred, medical services are in operation, and a camp kitchen has been organised for response teams.

85 000 tonnes of mobile equipment and light machinery for ground- and water-surface oil-product recovery has been air-freighted to Norilsk - with deliveries including boats (including a trimaran for in-water obstacle and barrier laying), a self-propulsion unit, a marsh excavator (“swamp buggy”) and quad bikes for travelling on waterlogged ground and marshland, a multifunctional unit for working in water, motorised pumps, oil-skimming equipment, and unmanned aerial reconnaissance vehicles drones.


Given the scale of this incident, Gazprom Neft is considering the possibility of involving more equipment and machinery, including river boom-defences and all-terrain vehicles. Preparations are currently underway to send additional response resources from those company subsidiaries having all the resources necessary - including cutting-edge specialist heavy equipment - to address such challenges.