Transocean failed to meet “recertification” maintenance deadlines for the Deepwater Horizon’s blowout preventer (BOP), the key instrument that failed in the Macondo well explosion, a company employee testified on Wednesday. 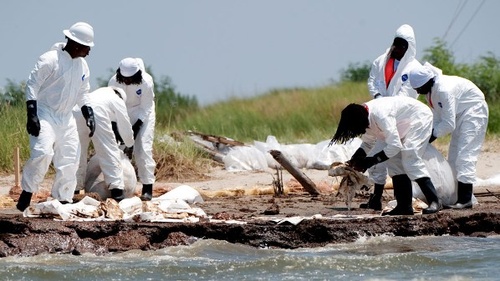 Transocean failed to meet “recertification” maintenance deadlines for the Deepwater Horizon’s blowout preventer (BOP), the key instrument that failed in the Macondo well explosion, a company employee testified on Wednesday.

Recertification, as recommended by the American Petroleum Industry, required disassembling the BOP and making any repairs every three to five years. Compliance is required by the US Minerals Management Services overseeing the offshore oil industry.

“If you look at this regulation, it’s probably out of compliance,’’ said Billy Stringfellow, Transocean subsea superintendent.

The men testified at the inquiry by the US Coast Guard and the Bureau of Ocean Energy Management into the April 20 well explosion in the Gulf of Mexico.

He said documents in the panel’s possession showed the BOP underwent pressure and function tests in the days preceding the incident – including one that morning – that confirm the BOP was operating properly before the incident.

In Depth: BP Oil SpillBP Listed 390 ProblemsInteractive: BP’s future
On April 20, the Macondo well exploded, killing 11 people and injuring 17. The BOP, designed to shut off the well, failed to work.

Harry Thierens, BP vice-president for drilling and completions, told the panel the BOP had been modified, which meant early efforts to shut the well were wasted because the BOP’s “plumbing” was different from what the response team had on its books. “I was, quite frankly, astonished that this could happen,” Mr Thierens said.

Mr Hay testified that he was involved in making changes to the BOP in the 2004-2005. He said he was unsure if BP was aware of them all.

Mr Colasuonno downplayed the modifications: “The plumbing issue had no bearing on the BOP’s ability to function on the night of the incident.” It was discovered, and the correct port was accessed within 24 hours by an ROV, and BP did not shut down the well for another several months.”