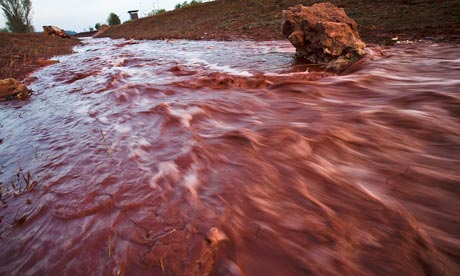 The European Union and environmental officials both fear an environmental catastrophe affecting half a dozen nations if the red sludge, a waste product of making aluminum, contaminates the Danube, Europe's second-longest river.

Officials from Croatia, Serbia and Romania were taking river samples every few hours Thursday but hoping that the Danube's huge water volume would blunt the impact of the spill.

The reservoir break Monday disgorged a toxic torrent through three villages and creeks that flow into waterways connected to the Danube. Creeks in Kolontar, the western Hungarian village closest to the spill site, were still swollen and ochre red days later and villagers said they were devoid of fish.

Dobson said the pH content of the red sludge entering the Danube had been reduced to the point where it was unlikely to cause further environmental damage. It had been tested earlier at a pH level of 13 and now was down under 10, and no dead fish had been spotted where the slurry was entering the Danube, he said.

The Hungarian Academy of Science said sludge samples taken two days ago showed that the muck's heavy metal concentrations do "not come close" to levels considered dangerous to the environment. But the academy said Thursday it still considered the sludge dangerous - apparently due to its caustic characteristics.

The sludge has devastated local waterways.

Prime Minister Viktor Orban, stopping at dawn in Kolontar, described the reservoir break as a disaster unprecedented in Hungary.

"If this had happened at night then everyone here would have died," the MTI news agency quoted him as telling villagers.

Orban suggested someone was clearly to blame, angrily exclaiming: "This is so irresponsible that it is impossible to find words!"

Local officials said 34 homes in Kolontar were unlivable but furious residents said the disaster had destroyed the whole village of 800 by making their land worthless. The prime minister called the worst-hit area a total write-off, saying he sees "no sense" in rebuilding in the same location.

Soldiers, emergency workers and volunteers dressed in a range of mud-splattered protective gear kept shoveling out the muck Thursday, a process that one official said could take months.

It is still not known why part of the reservoir collapsed and allowed the toxic torrent estimated at 35 million cubic feet (1 million cubic meters) of waste to sweep through the villages, killing at least four people and leaving three people missing. Disaster officials said over 150 people had been treated at hospitals, and 11 were still in serious condition Thursday.

Hungary's top investigative agency, the National Investigation Office, took over the probe into the spill and planned to look into whether on-the-job carelessness was a factor.

Herwit Schuster, a spokesman for Greenpeace International, described the spill as "one of the top three environmental disasters in Europe in the last 20 or 30 years."

The International Commission for the Protection of the Danube, which manages the river and its tributaries, said the sludge spill could trigger long-term damaging effects for both wildlife and humans.

Red sludge is a byproduct of the refining of bauxite into alumina, the basic material for manufacturing aluminum. Treated sludge is often stored in ponds where the water eventually evaporates, leaving behind a dried red clay-like soil.

Alumina plants are scattered around the world, with the 12 largest concentrated in Australia, Brazil and China.