Commercial production of non-conventional oil - of which reserves in place at the Salymsky-3 and Salymsky-5 blocks stand at more than 500 million tonnes of oil - is expected to start in 2025.

Gazprom Neft has completed 3D-seismic investigations at the Salymsky-3 block, having surveyed more than 300 sq. km using “Green Seismic” technology. Data interpretation is expected to be complete by the end of 2020, with the results being used to update the geological concept of the Bazhenov Formation and the traditional deposits at that asset.

The 1st exploration and appraisal well (with a 1 km-plus horizontal section) has been drilled at the block, with more than 300 m of core samples taken and despatched to laboratories in Khanty-Mansiysk and Tyumen for extensive examination. Preliminary results of rock-specimen tests indicate hydrocarbons present at 6 intervals throughout the strata, confirming this asset’s potential for commercial development.

The Bazhen Technology Centre will shortly be undertaking a 15-stage fracking operation at the Salymsky-3 block, with plans to begin geological prospecting works at the neighbouring Salymsky-5 block before the end of 2020. Both assets also offer considerable potential in terms of their traditional hydrocarbon reserves. 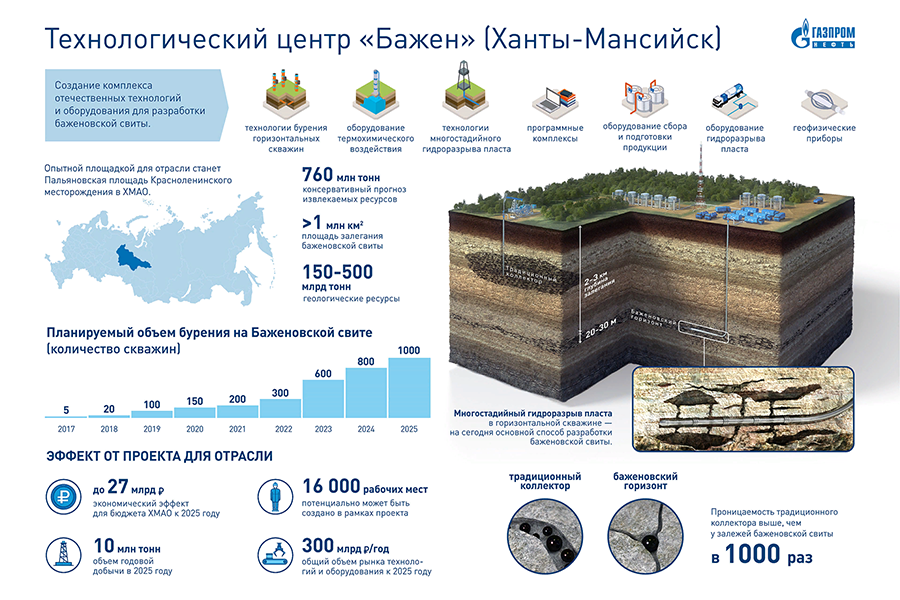 “Developing the Bazhenov Formation is a task of national importance and scale. These complex deposits are marked by their colossal resource potential, and high-quality oil. While we have to overcome a number of challenges in order to begin their commercial development, we have, already, as part of the national ‘Bazhen’ project, been able to cut the cost of producing non-conventional hydrocarbons by almost half.", said Alexei Vashkevich Director for Technological Development, Gazprom Neft.

"This proves that we are on the right track, and are moving ever closer to starting viable development of the Bazhenov Formation. Expanding the coverage of this project from the Palyanovskoye field to the Salymsky blocks means we can obtain new data and test and fine-tune our technological solutions under new geological conditions”, Vashkevichnoted.

“The Bazhenov Formation is the largest source of non-conventional oil in the world. And the future of the domestic oil industry is tied up with developing these hard-to-acess deposits. We have made serious progress in high-tech fracking and drilling in the process of testing new approaches to unconventional hydrocarbon production. I am confident that these solutions will allow us to achieve maximum efficiency in developing the Salymsky assets, as well as proving the key to complex reserves elsewhere in Russia”, Kirill Strizhnev Director General, Bazhenov Technology Centre.