Year at a Glance 2019: Katalizator JSC 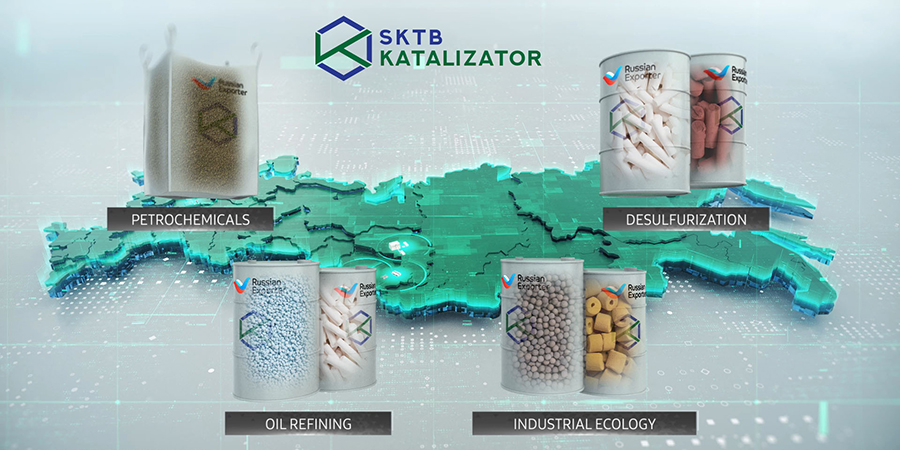 Moscow, February 25 - Neftegaz.RU.Looking back on the year of 2019, it is to be noted that it was a banner year for the Company. The production targets set for the last year were fully met without failing neither quality of the product nor delivery schedule. Total output of products in the past year amounted to over 15 thousand tons, which is up 5.5 thousand tons (58%) from 2018.The volume of investments in the Company's development reached 448.4 million rubles, showing annual increase (up 48% from 2018). Same deal with average staff number, which in 2019 amounted 275 employees (increase of 1% when compared to 2018). The average monthly salary in the past year increased by almost 17% and amounted to 60.5 thousand rubles.

Export income totaled 95% at the end of 2019. The primary customers of our products are the companies from the Middle East, the United States, the European Union, CIS countries, Australia, and China.

At the production site of Katalizator JSC in Novosibirsk, the raw material preparation section was retrofitted, including, in addition to technical changes implemented, the automation of the section (the process furnaces have been equipped with advanced control system). Construction of a new warehouse for storing finished products started.

In 2019, the R&D Department of the Company was rapidly developing. The first stage of the main building reconstruction was completed: ≈ 800 m2 designed for state-of-the-art, fully-instrumented laboratories (analytical/ research / quality control laboratory facilities). The number of employees increased by 27 %, including skilled professionals. Currently, R&D subdivisions of the Company employ 1DSc and 8 PhD holders in chemistry. The expert personnel allows performing successfully research work on the development of catalysts and carriers and supervising commercial production.

Ring-shaped catalysts with reduced hydraulic resistance of the bed for VOC neutralization have been developed.

To ensure efficient and proper work of the Company's R&D Department, 4 new catalytic laboratory scale test units for reforming, desulphurization, petrochemistry and neutralization of harmful emissions were purchased and put into operation over the last year.

A number of existing catalytic units have been upgraded. 11 million rubles worth of new equipment for testing catalysts has been purchased. The activities for creating a commercial plant to produce a catalyst for dehydrogenating ethylbenzene into styrene have been launched.

In the past year, the Company's Engineering Department expanded its competence in the Claus process recovering elemental sulfur. Currently, the experts of Katalizator JSC are ready to provide comprehensive engineering services, including performance analysis of the sulfur recovery unit, calculation of hydrogen sulfide conversion rates at the thermal and catalytic stages, issuing recommendations for the most efficient operation mode, selecting the optimal package of catalysts, testing the physical, chemical and catalytic properties of fresh and spent catalysts, supervision of the catalyst loading, monitoring of the sulfur recovery unit lifetime operation.

That same year, Katalizator JSC initiated a project of National Center for Engineering and Catalyst Testing (NCECT). In February 2019, Katalizator JSC presented the NCECT investment project at the Russian Investment Forum in Sochi, with the support of the Governor of the Novosibirsk region. Immediately following the forum, the project was approved at the meeting of the Governor’s Council for Investments to be implemented in the Novosibirsk Region. The project is aimed at increase in output of light oil products in the refining catalytic processes, followed by the production of incremental products on the national scale by about 100 billion rubles per year.

On June 6, 2019, the joint-stock company NCECT was established. In September 2019, a large-scale investment project NCECT was unanimously approved by working group for implementing the Program for Reindustrialization of the Economy of Novosibirsk Region up to 2025 under the direction of the Minister for Trade & Industry of the Russian Federation, Mr. Denis Manturov, at the VII International Forum and Exhibition of Technological Development TECHNOPROM.

At the end of 2019, the investment project NCECT was presented at the meeting of the Governor of the Novosibirsk Region with the leaders of the Russian Direct Investment Fund in the context of the Days of the Novosibirsk Region in the Federation Council of the Russian Federation. Currently, the intensive search and recruitment for investors among major Russian vertically integrated oil companies (VIOK) and independent refineries, as well as foreign investors is continuing.

Katalizator JSC has already invested 250 million rubles and will invest another 250 million rubles by June 2020.These funds are sufficient for the first two years of the project implementation (2020-2021), when the construction of the main facilities is scheduled. The major equipment (catalyst testing facilities, analytical equipment) is expected to be supplied in three stages, and NCECT design capacity is scheduled to be reached by 2024. The total cost of creating the center is estimated at 1.9 billion rubles.

Awards and Achievements of the Company in 2019

1. Participant of the National Voluntary Certification Project "Made in Russia". Certified as Russian Exporter to confirm that the Company is a bona fide manufacturer and reliable supplier of export products.

3. Winner of the All-Russian Competition "100 Best Products of Russia”.

- Silver Mark was given to the Claus Titania catalysts AOK-75-46, Grades A, B, V and AOC-75-44 – catalyst for selective oxidation of hydrogen sulfide to sulfur.

- Award for achievements in the field of quality was presented to Vitaly Khan, CEO of Katalizator JSC.

4. Man of the Year Award. Vitaly Khan, CEO of Katalizator JSC was recognized as Exporter of the Year.

5. “Faces of Business” Award. Katalizator JSC became the winner in the Business of Technology category. When selecting the winner, the investment project "Implementation of the CET technology initiative: Catalysts, Engineering and Technologies" was considered, aimed at upgrading the Company's administrative and laboratory building with technical re-equipment of about 40 research laboratories.

6.  The National Award in the area of Entrepreneurship “Golden Mercury”. Katalizator JSC was given the II Prize of the regional competition stage.

100
Shell moves to cut costs due to coronavirus outbreak
Advertising at neftegaz.ru