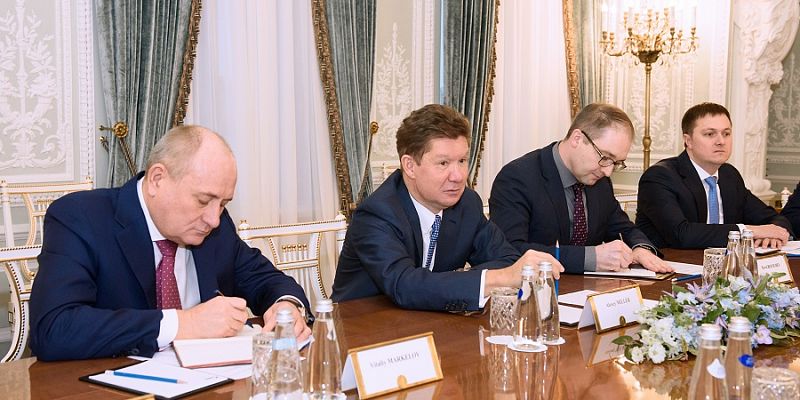 St. Petersburg, December 2 - Neftegaz.RU. A working meeting between Alexey Miller, CEO of Gazprom, and Mario Mehren, Chairman of the Board of Wintershall Dea, took place in Russia.

The meeting was focused on the current issues of cooperation between the companies. Particular attention was paid to natural gas deliveries. The parties noted the contribution of the Nord Stream gas pipeline to the reliability and safety of gas supplies to consumers in Germany and Europe.

Special emphasis at the meeting was placed on the progress of the Nord Stream 2 project and the development of the German gas transmission system. In addition, the parties discussed the ongoing interaction between the companies on developing deposits located in Russia. Alexey Miller and Mario Mehren expressed their appreciation for the joint efforts on the projects for the development and exploration of Blocks 1A, 4A and 5A in the Achimov formations of the Urengoyskoye oil, gas and condensate field and the Yuzhno-Russkoye oil and gas field.

Companies
333
333
Earnings at PGNiG surged in the 9 months of 2020, thanks to the impact of an arbitration award paid by Gazprom
Advertising at neftegaz.ru

Advertising at neftegaz.ru
Latest news
Oil and gas worldwide
129
129
Rystad: E&P investments to reach $380 billion in 2021 but 20 % at risk of deferral
Oil and gas worldwide
171
171
Uzbekneftegaz and Gazprombank discuss the main conditions for attracting credit funds from a Russian bank
Incidental
137
137
Turkey extending the seismic survey work in a disputed part of the eastern Mediterranean
Transportation and storage
143
143
European Commission approves an additional state guarantee for Klaipėda LNG terminal in Lithuania
Markets & Stocks
162
162
Gazprom Export credit rating has been affirmed by ACRA at AAA(RU) level