BP aims to "kill" well as early as Tuesday

BP Plc was still hoping to attempt the first of two operations to permanently plug its ruptured Gulf of Mexico well on Tuesday despite the technical delay of a crucial test. 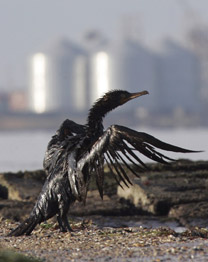 BP Plc was still hoping to attempt the first of two operations to permanently plug its ruptured Gulf of Mexico well on Tuesday despite the technical delay of a crucial test.

Optimism about the planned "static kill," which will involve the injection of drilling mud into the top of the well, helped fuel a rally in BP and other energy shares on Monday despite reports that U.S. regulators are investigating insider trading in the British energy giant's stock.

But BP said a test planned for Monday ahead of the operation would now likely take place on Tuesday because a hydraulic leak was detected. BP had been aiming to begin the static kill itself on Tuesday and remained cautiously optimistic it could still do so.

"It is anticipated that the injectivity test and possibly the static kill will take place Tuesday," BP said in a brief statement late on Monday, after U.S. markets had closed.

The well was temporarily sealed in mid-July but the static kill followed by the completion of a relief well later in August are seen as the permanent solutions to the leaking well, which U.S. government scientists estimate has released almost 5 million barrels of oil since late April.

The worst offshore oil spill in U.S. history has been an environmental and economic nightmare for the Gulf coast.

Away from the Gulf, the Securities and Exchange Commission is investigating insider trading in shares of BP, including whether BP employees profited illegally from the spill.

The full extent of the disaster is slowly emerging. U.S. government scientists on Monday refined estimates of how much oil had flowed into the Gulf from the well.

The Flow Rate Technical Group and a team of government scientists said 4.9 million barrels of oil have been released and BP had siphoned about 16 percent of this to vessels at the ocean's surface, while the rest went into the sea.

Investors will scrutinize these figures closely as BP's final costs may be tied to how much oil is estimated to have flowed into the Gulf from the spill. BP has announced plans to sell $30 billion in assets over the next 18 months to cover its massive spill-related costs.

Two sources familiar with the preliminary SEC probe said the alleged insider trading took place after the start of the spill on April 20 when a rig exploded, killing 11 workers.