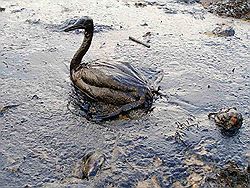 BP pumped heavy drilling mud into its blown-out Gulf of Mexico well on Tuesday in a "static kill" operation it hopes will help permanently plug the world's worst accidental marine oil spill.oil
Transocean Offshore Installation Manager Chris Wokowsky stands on the deck of the Development Driller II, which is drilling a relief well, at the site of the Deepwater Horizon oil spill in the Gulf of Mexico off the coast of Louisiana.

The operation, aimed at subduing the still unstable deepwater gusher that was provisionally capped in mid-July, is part of a two-pronged strategy that seeks to finally seal the Macondo well later in August through a relief well.

The "static kill" will take between 33 and 61 hours. "The aim of these procedures is to assist with the strategy to kill and isolate the well, and will complement the upcoming relief well operation," British-based BP said in a statement.

Kent Wells, BP's senior vice president of exploration and production, told reporters in a briefing that drilling of the first of two relief wells, seen as the definitive, permanent "kill" solution, could resume by Thursday.

The relief well should intercept the ruptured Macondo well shaft in mid-August, so that more mud, and cement can be injected to shut it down for good.

The full magnitude of the Gulf of Mexico spill, triggered in April by a deadly rig explosion at the BP-owned Macondo well, became apparent on Monday as government scientists released revised figures showing almost 5 million barrels of oil leaked before the well was temporarily capped on July 15.

This made it the world's largest accidental maritime release of oil, surpassing the 1979 Ixtoc well blowout in Mexico's Bay of Campeche that gushed almost 3 million barrels.

Retired Coast Guard Admiral Thad Allen, who oversees the U.S. oil spill response, said earlier that engineers had succeeded in halting a hydraulic leak found on Monday in the cap that could have hindered the "static kill" operation.

Allen told reporters engineers were moving cautiously, initially pumping in only a small amount of mud, so as not to damage the fractured well and cause fresh leaks.

"This thing won't be truly sealed until those relief wells are done," Allen added.

The spill has unleashed an environmental and economic catastrophe on the Gulf Coast, disrupting the livelihoods of fishermen and tourism operators and triggering a barrage of damages lawsuits against BP. The company has said it will pay all legitimate claims and clean up fouled beaches and marshes.

The new leak estimates spelled further bad news for BP, which also faces an investigation by U.S. securities regulators into whether its employees profited illegally from the spill.

The revised flow numbers suggest the company had underestimated costs by at least $1 billion.

BP had estimated the well had leaked some 4 million barrels of oil and that it would be fined $1,100 per barrel under the Clean Water Act. The company faces fines of $4,300 per barrel if gross negligence is proven, but said it saw no need to change its provision as a result of the new estimate.

"BP has fallen to a point where people are beginning to get their hands around how large this might be and as a result the uncertainty has started to leave the stock and people start buying it back," said Shawn Hackett, president at Hackett advisors in Boynton Beach, Florida.

But the British energy giant faced fresh accusations on Tuesday that it was seeking to restrict information.

The National Wildlife Federation released a letter from nine scientists and marine researchers concerned over reports that BP was requiring confidentiality clauses in research contracts with scientists, which would prevent them from releasing findings for three years.

"BP is mounting a PR campaign suggesting that the environmental damage of the spill is over when we know that they have dumped millions of gallons of toxic dispersants to sink the oil out of sight, turning the Gulf into a toxic chemistry experiment," said Jeremy Symons, senior vice president of the National Wildlife Federation.

BP, which took a $32.2 billion charge related to the spill in its results last week, has said it will sell $25 billion to $30 billion of assets to pay for the disaster.

On Tuesday, it said it would sell its Colombian oil assets to a consortium of Canada's Talisman Energy and Colombia's state-run Ecopetrol for $1.9 billion.

BP's 10 percent partner in the well, Japan's Mitsui, has yet to decide if it will shoulder any costs, helping the trading house to report a 79 percent jump in profits to 102.5 billion yen ($1.18 billion).

Other oilfield services and drilling companies are counting the costs of a U.S. drilling moratorium and permit delays.

But a top official at the U.S. Interior Department on Tuesday said he hoped the ban on deepwater oil drilling could be lifted "significantly" ahead of the current November 30 deadline.

And Senate Majority Leader Harry Reid is delaying action on energy legislation that would implement offshore drilling reforms until some time after Congress returns from its summer recess in mid September.