Egypt's natural gas industry continues to grow, after two major players in the country have committed to further investment. 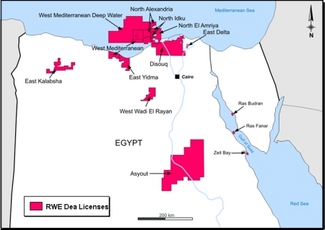 Egypt's natural gas industry continues to grow, after two major players in the country have committed to further investment.

The country’s General Authority for Free-zones and Investments said on Saturday that Apache has committed $1.5 billion to the country in new investment next year, according to a Reuters report. The news is a rare vote of confidence in Egypt's economy, whcih has faltered since President Hosni Mubarak was replaced by an interim military junta in February this year.

BP announced on 24 October a new discovery in the North El Burg Offshore Concession in the Nile Delta, named ‘Salmon.’

“Salmon, drilled by IEOC, the affiliate of ENI in Egypt, on behalf of concession operator BP, is located 50 kilometers to the north of Damietta,” BP said in a company statement. “The wireline logs and pressure readings confirmed the presence of gas in two shallow Pleistocene intervals. The well was drilled by Scarabeo IV rig in water depths of 87m and reached a total depth of 1600m. Further appraisal work to evaluate the resources is underway.”

BP has stakes in eleven blocks in the Nile Delta, six of which it operates. The supermajor has previously sold $5 billion Egyptian assets to Apache, including Nile Delta blocks and assets in the western desert, to foot the $40 billion bill from the Gulf of Mexico spill in 2010.