The Gazprom headquarters hosted today a working meeting between Alexey Miller, Chairman of the Company's Management Committee and Andrey Nelidov, Head of the Republic of Karelia. 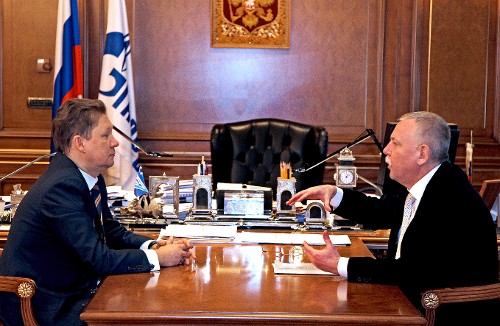 The Gazprom headquarters hosted today a working meeting between Alexey Miller, Chairman of the Company's Management Committee and Andrey Nelidov, Head of the Republic of Karelia.

The parties reviewed the progress with the Agreement of Cooperation between Gazprom and the Karelian Government. The parties noted that the scope of the front end engineering and design work performed by the Company in the Republic had increased considerably in 2012. It amounted to nearly RUB 785 million between 2006 and 2011 with RUB 500 million slated for 2012. As in prior years, funds will be allocated for the front end engineering and design work required to construct the Murmansk – Volkhov gas trunkline which will ensure gas transmission from the Stockman gas and condensate field into the Unified Gas Supply System.

Alexey Miller and Andrey Nelidov also discussed the challenges connected with prospects for gasification of the Republic of Karelia. The parties noted that Gazprom would consider possible construction of a gas lateral from the Volkhov – Petrozavodsk gas pipeline. The gas lateral construction will allow starting gasification of the Olonets, Pitkyaranta and Suoyarvi Districts.

The Agreement of Cooperation between Gazprom and the Karelian Government was signed in April 2005 and remains in force without a time limitation. The Accord on Gasification of the Republic was inked in November 2011.

Between 2007 and 2010 Gazprom invested RUB 640 million in gasification of Karelia. These funds were used to construct four and to put two inter-settlement gas pipelines into operation.

The gasification level in the Republic of Karelia accounts for 3.4 per cent. The same indicator throughout Russia averages 63.1 per cent.

Between 2007 and 2011 four sports sites and one football field with artificial turf worth RUB 44.6 million in total were constructed in the Republic of Karelia as part of the Gazprom to Children program.

Companies
329
329
KAMA TYRES and Siemens have signed an agreement to continue cooperation
Advertising at neftegaz.ru