JSC Gazprom Neft has published its unaudited consolidated financial results in accordance with accounting principles generally accepted in the United States of America (US GAAP) for the year ended 31 December 2011. 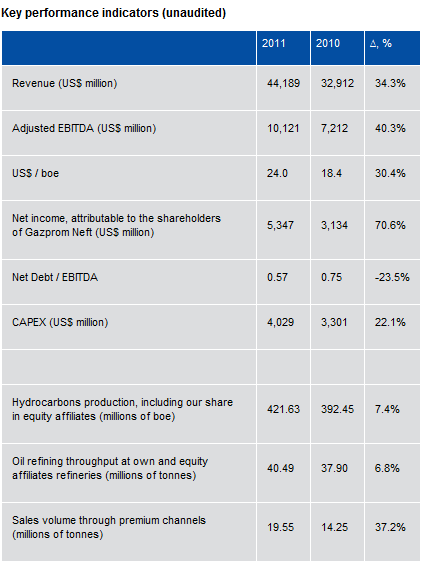 JSC Gazprom Neft has published its unaudited consolidated financial results in accordance with accounting principles generally accepted in the United States of America (US GAAP) for the year ended 31 December 2011.

The Company’s performance improved substantially in 2011 due to increases in hydrocarbon production, oil refining volumes and sales of premium products, together with higher crude and petroleum product prices. Revenue grew by 34.3% Y-o-Y to US$ 44,189 million and adjusted EBITDA grew by 40.3% to reach US$ 10,121 million — a record for the Company.

Hydrocarbon production volumes increased by 7.4% Y-o-Y to 421.63 mmboe (57.3 mmtoe) driven by continued production growth at the Priobskoye field, production start ups at the Muravlenkovskoye and Novogodneye fields and the acquisition of the Orenburg assets (eastern part of the Orenburgskoye field and the Tzharichanskoye and Capitonovskoye fields).

The CAPEX increase of 22% was driven by the Company’s large-scale refinery upgrade program in Russia and Serbia, and increased investments to expand the retail network.

Commenting on the 2011 results, Chairman of Gazprom Neft Executive Board Alexander Dyukov stated: “In 2011 Gazprom Neft delivered an outstanding financial and operational performance. We achieved these results both because of the favorable market conditions and by consistent implementation of the Company’s long term strategy aimed at doubling key production ratios while maintaining leadership in operational and financial efficiency.

In 2011 the Company led its Russian peers in hydrocarbon production growth and added a new production region in Orenburg. Gazprom Neft also continued upgrading its refining assets to improve the quality of petroleum products and produce gasoline to meet the highest environmental standards. The Company expanded its network of retail sites in Russia and abroad, became the leading supplier of gasoline and jet fuel to the domestic market and substantially increased its share in lubricants and bunkering markets.