Apache Could Earn $3B on Rumored Deepwater US Gulf Sale

Apache Corp. could realize up to $3 billion in a rumored sale of its deep water Gulf of Mexico oil and natural-gas assets, analysts said Thursday. 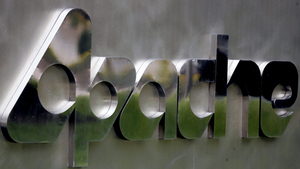 Apache Corp. could realize up to $3 billion in a rumored sale of its deep water Gulf of Mexico oil and natural-gas assets, analysts said Thursday.

Apache was said to be considering an exit from the Gulf to concentrate on its onshore North America drilling assets, an unnamed person told Bloomberg Wednesday. Apache declined to comment on the rumors, only noting that it announced in its fourth-quarter earnings release that it planned to sell $2 billion in assets.

"When we have something concrete to share, we will do so," Apache spokesman Bill Mintz said.

A sale would undo Apache's relatively recent investment in the Gulf of Mexico, when it acquired Mariner Energy in 2010 for about $2.4 billion in debt and cash.

Operating costs in the Gulf of Mexico have risen since the deadly 2010 Deepwater Horizon accident due to new safety requirements.

Michael Yeager, CEO of BHP Billiton Petroleum said during a talk at the IHS CERAWeek conference in Houston this week that his company's Gulf of Mexico wells now cost about $170 million to drill, up from $120 million before the Deepwater Horizon accident.

Many U.S. oil and natural-gas producers are trimming their exposure to the deep water Gulf of Mexico, where developing wells thousands of feet under the waves can cost billions of dollars. As hydraulic fracturing, or fracking, and other new drilling methods have proliferated, producing oil and gas in onshore shale formations is seen as less technically challenging and more profitable.

In 2012, Apache drilled one operated and five nonoperated wells in the Gulf of Mexico deepwater region, according to the company's web site. Apache finished the year with an interest in 166 blocks in region and about 900,000 gross acres.

Apache held nonoperating interest in two deep water Gulf of Mexico wells, Lucius and Heidelberg, according to its annual report. Apache's Gulf of Mexico total daily production averaged 10,000 barrels of oil and liquids and 48 million cubic feet of natural gas, about 2% of the company's overall production.

"Apache would not be selling a large amount of production or reserves," Simmons analyst Bob Herbert said in a note.

156
3 new licenses for PGNiG in Norway
Advertising at neftegaz.ru