From September 2013 Gazpromneft – Aero achieved a 60% increase of its monthly delivery of jet fuel to foreign airline companies at Domodedovo Airport in Moscow. 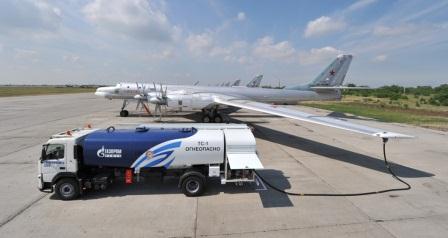 From September 2013 Gazpromneft – Aero achieved a 60% increase of its monthly delivery of jet fuel to foreign airline companies at Domodedovo Airport in Moscow.

Indicators increased as the result of signing new, long-term contracts with 6 airline companies: Lufthansa, Swiss International Airlines, Austrian Airlines, Brussels Airlines, Air Dolomiti, and Thai Airways. In the first eight months of 2013, Gazpromneft – Aero supplied airline companies with more than 19,000 tonnes of jet fuel, which is twice the volume of what was supplied for all of 2012.

The company already provides jet fuel supply service for Emirates daily flights, including refuelling the largest airplane in the world — the Airbus A-380. Summarising the results of their collaboration Emirates awarded Gazpromneft – Aero their Certificate of Appreciation, and in August 2013 the airline company extended its contract for jet fuel supply service until 2015.

Vladimir Yegorov, General Director of Gazpromneft – Aero observed: “We very much value our partnership with the world’s largest airline companies, and we are prepared to increase our collaboration in airports throughout Russia. I am certain that working with the leaders in the international aviation industry will enable us to improve the standards for the jet fuel supply service sector within Russia, and also strengthen the positions of Gazpromneft – Aero on the international market.”