Gazprom Neft’s Board of Directors has reviewed the initial results of the 2013 investment programme and budget as well as plans for 2014. 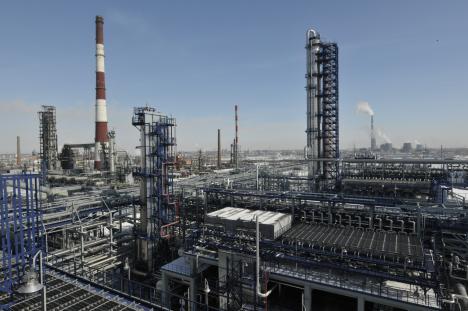 Gazprom Neft’s Board of Directors has reviewed the initial results of the 2013 investment programme and budget as well as plans for 2014.

The Company’s 2013 capex is expected to exceed RUB 210 billion. A decrease in comparison with the previously approved business plan is due to the delay in auctions for the fields of the undistributed subsoil fund. In 2014, Gazprom Neft is looking to increase its investment programme by 32% to RUB 278 billion*. Just over a third of this amount will be allocated to exploration and production projects in the traditional regions of operation. Maintaining the production level at the mature fields, commissioning of hard-to-recover reserves and the development of projects in the Orenburg region are the main priorities of Gazprom Neft in this area of operation. Major new production projects to be commissioned in 2014-2016, such as the Novoportovskoye and Messoyakha in the Northern part of the Yamalo-Nenets Autonomous District, and international projects dominate Gazprom Neft’s investment portfolio. Study of Eastern Siberia and Iraqi Kurdistan fields will remain the main focus in the Company’s exploration activity.

Investments in oil refinery are expected to reach RUB 24 billion in 2014. Having switched to Euro-5 standard fuel production Gazprom Neft is launching a programme to improve the refining yields. The Company will continue to focus on expanding its petrol stations network as well as developing distribution channels for high margin petroleum products.

The Board also reviewed Gazprom Neft’s offshore projects. 2013 was an active year of preparation for the start of oil production at the Prirazlomnoye field - the first to go into commercial production in the Russian part of the Arctic shelf. The first oil from Prirazlomnoye will be produced in December 2013.

Alexei Miller, Chairman of the Management Board of Gazprom, said: "In 2013 Gazprom Neft has met all its business plan targets and continued to work on delivering its strategic objectives. Modernisation of refineries, which will provide them with a leading position in the industry, as well as developing new regions, including the Arctic shelf, will be the key areas of the Company’s further development. Gazprom Neft remains a leader in the oil industry by efficiency and is ranked first by return on capital and total shareholder return.”