Gazprom has started producing oil from the Prirazlomnoye field. It is the first Russian project for developing the Arcticshelf and the commencement of Gazprom's large-scale activities aimed at creating a large hydrocarbon production center in the region. 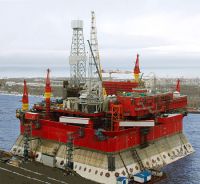 Gazprom has started producing oil from the Prirazlomnoye field. It is the first Russian project for developing the Arcticshelf and the commencement of Gazprom's large-scale activities aimed at creating a large hydrocarbon production center in the region.

The Prirazlomnoye oil field is located in the Pechora Sea, 60 kilometers off the shore. The recoverable oil reserves amount to 71.96 million tons, projected oil production comes up to some 6 million tons a year (to be reached after 2020). The first oil shipment from Prirazlomnoye is expected in the first quarter of 2014, and it is planned to produce no less than 300 thousand tons of oil throughout the year.

The Prirazlomnaya offshore ice-resistant stationary platform secures every process operation in the field – drilling for oil, its production and storage, end product processing and offloading. It is for the first time in the world that hydrocarbons in the Arctic shelf will be produced by a stationary platform.

Prirazlomnaya is an unparalleled platform designed and constructed in Russia on Gazprom's request. It is intended for operation under extreme environmental and climatic conditions, meets the most stringent safety requirements and can resist high ice loads. Special alloys resistant to corrosion, low temperatures, high humidity and an aggressive marine environment were used during the platform construction. The platform is secured on the seabed by its own weight (506 thousand tons, including the stone berm artificially created for protection against scouring). A high-strength deflector secures the platform from wave and ice exposure.

The design features of Prirazlomnaya fully exclude any oil spills during its production and storage. All the wellheads are situated inside the platform. This way, its foundation serves as a buffer between the wells and the open sea.

Produced oil is stored in the caisson with three-meter-high concrete walls covered with two-layer corrosion- and wear-proof clad steel plate. The safety margin of the Prirazlomnaya caisson exceeds greatly the actual loads.

A wet method of oil storage is used at the platform. The method eliminates the possibility of oxygen getting inside the tanks and thus prevents the creation of an explosive environment.

All the associated gas produced at Prirazlomnaya will be used for the platform services.

A zero discharge system is employed at the platform. The system excludes the possibility of drilling and production waste getting into the sea. It will be pumped into special absorption wells or, if necessary, collected into tanks and delivered to the shore for further disposal. Reservoir and oil-contaminated waters will be pre-treated and also fed into the well.

In order to pump the end products into oil vessels, special equipment for direct oil loading was developed. The loading block system goes off in seven seconds at most, making it possible to avoid accidental oil spills. Year-round product shipments will be secured by Mikhail Ulyanov and Kirill Lavrov super ice-class oil vessels with double hulls and a deadweight (cargo weight) capacity of 70 thousand tons. These vessels were specially designed for shipping oil from Prirazlomnaya and supplying it to the market.

“Gazprom is Russia's outpost in the Arctic. Last year we conquered Yamal, having created an unparalleled in the world, new onshore gas production center in the Arctic. And today we have pioneered the Russian Arctic shelf development.

There is no doubt that Gazprom will continue advancing in the Arctic,” stated Alexey Miller.