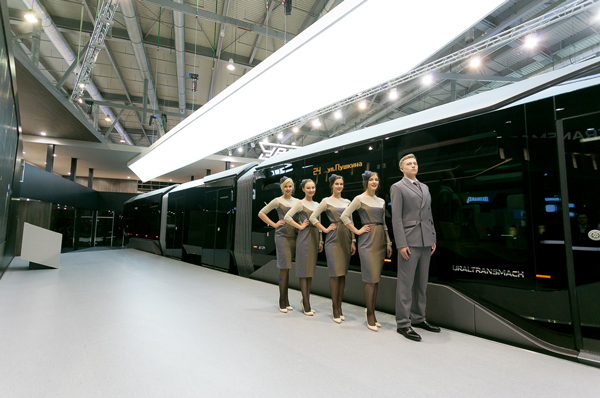 Besides, during Dmitry Medvedev’s visit to the UVZ exhibition stand, the Government of the Sverdlovsk region, Administration of Yekaterinburg, OJSC “Research and Production Corporation “URALVAGONZAVOD” and OJSC “Gazprombank” signed a cooperation agreement on urban electric transport.

Minister of Industry and Trade of the Russian Federation Denis Manturov has also studied R1 developed by UVZ. He went inside the tram and sat at the control panel. The Minister recommended "introducing the car to the international market".

Russia One Tram (“R1”) is a new generation transport vehicle, which has no analogues in Russia. It was developed at OJSC “Uraltransmash” (a part of UVZ Corporation located Yekaterinburg) based on a 71-409 model car. It has improved performance and a completely new exterior and interior design.

Experimental Design Office “Atom” headed by Alexey Maslov, was focused on the contemporary design. Alexey Maslov commented on the Sci-Fi design of the tram: is it shaped like a crystal – a jewel in a metal shell. And crystal because it reflects the city in which it moves. This means that the car will perfectly integrate into any landscape - forest, industrial area, any sort of modern buildings. The overhanging cabin nose is another innovation in terms of design. Firstly, the tram is not a high-speed Japanese train, it doesn’t need super aerodynamics. The tram's average speed is 24 km/h and its aerodynamics can be negative given its weight. Secondly, such cabin gives the driver a 30% wider view both in the front and on sides. It minimizes the risk of running over pedestrians.

“It was not just the leadership at the Russian market issue that we resolved. We are speaking of introducing UVZ and Uraltransmash to international markets, such as Eastern Europe, and South America. This tram can easily operate in Melbourne. We compete with world leaders such as Alstom (France) and Bombardier (Canada), keeping in mind their latest designs. Putting aside false modesty, I can say that we are at least within the competition. It’s a project of a great rarity for Russian market”, Alexey Maslov said.

R1 tram or "iPhone on rails" meets the highest requirements of our time. It’s more ergonomic, modern and cost-efficient than its western analogues. Its bidirectional, the body is made of compositional materials, it has a modular design, which allows setting a unique cabin for each city. The tram can hold 190-270 passengers, depending on configuration.

According to Uraltransmash specialists, they used 100% low-floor tested bogeys. The bogeys are produced in Russia and entirely of Russian units, which makes them 2 times cheaper than western ones are. This is significant, because the cost of the bogey makes the largest part of the cost of the whole tram. R1 tram can travel smoothly even on imperfect rails due to unique design features of the bogey. Moreover, R1 is equipped with Wi-Fi, GPS, GLONASS navigation, seven HD-CCTV cameras, air-conditioning, anti-bacterial handrails and many other innovations.

Alexey Nosov, CEO of OJSC "Uraltransmash", commented on the new development: “This tram was created for the first time in Russia and the world and we will continue to promote this concept. It is truly innovative and revolutionary. It’s innovative because R1 is posed completely different, it’s a new culture.

R1 is a prototype. It must pass the test. A lot of work is to be done before concept car can be put in mass production. It’s quite possible that in 2015 its mass production will start. Uraltransmash tram production facilities are being upgraded. These trams are expected to run in Moscow, St. Petersburg, Nizhy Novgorod, Yekaterinburg and Volgograd. There is a plan to develop a new tram that will run underground, on the basis of this concept”, said Alexey Nosov.

Designed to meet interests of different social groups, R1 will improve urban environment and change it esthetically. Its comfortable lounge made of modern materials will increase safety and popularity of this type of transport among citizens.

Another cooperation agreement was signed at the exhibition – on partnership during WorldSkills National championship of cross-industry professions in high-tech branches.

It was signed by the head of the Ministry of Industry and Trade of the Russian Federation, Denis Manturov, the governor of Sverdlovsk region Yevgeny Kuyvashev, head of the Agency for Strategic Initiatives Andrei Nikitin and CEO of Uralvagonzavod Corporation Oleg Sienko.