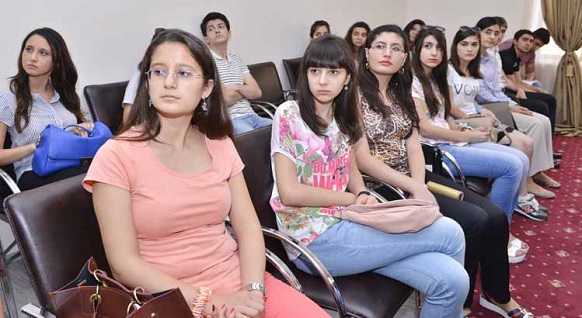 Elmar Gasimov, the Rector of BHOS, as well as Farhad Hajiyev, Youth Foundation Executive Director and Seymur Orujov, the Chairman of the New Azerbaijan Party’s Youth Wing attended the event. Welcoming the participants and the attendees, Rector Gasimov emphasized that establishment of the Youth Foundation based on the Decree issued by Ilham Aliyev, the President of the Republic of Azerbaijan, paved the way to sponsor and turn into projects the ideas of creative young people. The Rector noted that BHOS students also put forward their ideas and initiatives for implementation of such projects, underlying that Emilya Mammadova’s project had quite a specific significance to facilitate the development of public speaking skills, adding that the school was planning to offer public speaking courses for senior students.

Youth Foundation CEO Farhad Hajiyev briefed on the foundation’s mission, vision and the supported porjects, underlying that the foundation was established with the view of supporting the realization of young peoples’ creative ideas and that the application process was fully transparent and made online.

NAP Youth Wing Chairman Seymur Orujov noted that BHOS took the lead among most of the other old national universities and establishment of the school brought fair competition into the higher education area, which in turn would always lead to development. He emphasized holding of various social events and workshops to support students’ public speaking skills as one of the advantages of BHOS.

It is worth to mention that the main goal of the Public Speech Project is to develop public speaking abilities in English, foster leadership skills, and improve students’ abilities to apply advanced presentation methods on different topics, as well as hold discussions on various social activities of young people. On the first day of the workshop, Project Coordinator Emilya Mammadova and trainer Zarifa Orujova made presentations on “How to make effective presentations and Public Speech” topics, while the second day continued with students’ presentations.

A total of 66 students took part in the workshop and were awarded participation certificates by Rector Gasimov and Emilya Mammadova.