A naming ceremony for Sovcomflot’s new icebreaking standby vessel was held on Thursday.

The vessel was constructed at the Arctech Helsinki Shipyard and was commissioned under a long-term agreement between SCF and Sakhalin Energy for the Sakhalin-2 project.

The Russian-flagged vessel will be responsible for ensuring the safety of the personnel on the offshore oil and gas production platforms of Sakhalin Energy in the Sea of Okhotsk, to respond to emergency spills at sea and to support the company’s operations within its technical capabilities. 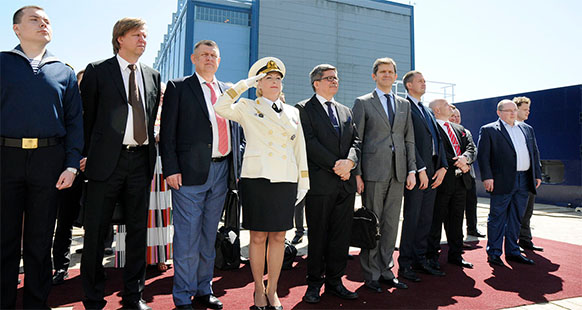 The Stephan Makarov is the 1st of 3 identical vessels ordered by SCF Group for operations at the Sakhalin-2 project.

One more ship commissioned by SCF for this project, an icebreaking supply vessel Gennadiy Nevelskoy, has already been delivered and arrived at Sakhalin Island in April 2017.

The agreement between SCF Group and Sakhalin Energy, signed in 2014, involves the operation of all 4 vessels for 20 years under the Sakhalin-2 project.

According to Sovcomflot, the vessel was named after Stepan Makarov, a Russian admiral and a polar explorer who played a prominent role in establishing the Russian icebreaker fleet.

Vladimir Emelianov, Vice President of SCF Group, said: “SCF Group continues to implement its current strategy and steadily expands the involvement of its fleet in long-term energy projects, Sakhalin-2 taking a prominent place among them. Servicing offshore oil and gas fields, especially in regions with harsh environments, is one of the priority segments for SCF Group.

All the vessels are operated under long-term time charter contracts with Sakhalin Energy.