Gazprom Neft and Repsol to develop hydrocarbon resources in the Khanty-Mansiysk-Yugra. 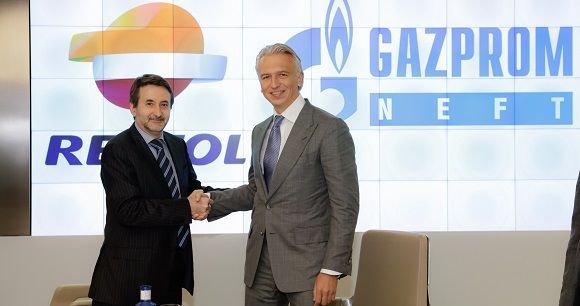 The CEO´s of Gazprom Neft and Repsol signed a MoU on July 7, 2017, to increase their collaboration in West Siberia and jointly explore its mostly-oil investment opportunities in the area adjacent to existing exploration licenses owned by Repsol’s affiliate Eurotek Yugra.

The MoU commits both to seek new opportunities in collaboration in order to grow exploratory activity in West Siberia.

Either company will be able to pursue opportunities individually after the partner´s right of 1st refusal.

Gazprom Neft acquired its stake earlier this week and has an option to raise its Eurotek Yugra stake to 50%.

Repsol in 2014 announced 2 hydrocarbon discoveries in the area's Karabashsky 1 and 2 blocks, recoverable resources of which are estimated at 240 mn barrels of oil equivalent by Russia's natural resources and environment ministry.

Repsol did not give an oil/gas breakdown of that figure.

The blocks are located in the southwest of the Khanty-Mansiysk autonomous region.

Gazprom Neft's statement though said the 2 blocks contain the Ouryinskoye field, reserves of which it put at 33.8mn metric tons of oil only, and that a final investment decision on its development is due at the end of 2019.

There was no immediate comment from Repsol on whether the MoU's focus would be predominantly on oil, or both on oil and gas.

Oil producer Gazprom Neft - which is 96% owned by Gazprom - said separately on July 5 that its wholly-owned subsidiary had begun construction of a 100-km long, 0.5bn m3/yr capacity pipeline for associated gas to connect the booster compressor station at the Urmanskoye field with gas transportation infrastructure operated by Gazprom's Tomskgazprom.

Building the pipe is part of a project to achieve 95% utilisation of associated gas from the Urmanskoye and Archinskoye fields, as well as assets at licence block no 105 (Yuzhno-Pudinsky block).